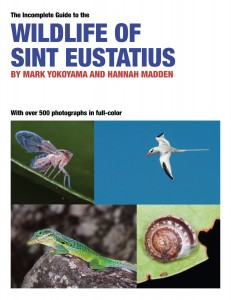 We are working to produce a guide to the unique wildlife of Statia. When completed, The Incomplete Guide to the Wildlife of Sint Eustatius will feature color photos and detailed information about the entire range of wildlife on Statia, from mammals and birds to insects and spiders.

Like all islands, Statia has a unique community of wildlife, including both native species and migrants that travel thousands of miles to winter here. This book will be the first guide to the wildlife of the island, uncovering a rich natural heritage that deserves to be celebrated and shared.

Mark Yokoyama is a naturalist, author and wildlife educator living on Saint Martin. He has published two editions of The Incomplete Guide to the Wildlife of Saint Martin, the first book of its kind on the island. He is also co-founder and Treasurer of the non-profit association Les Fruits de Mer. Les Fruits de Mer organizes four major wildlife events for the public on Saint Martin and conducts a variety of workshops and presentations in local schools. Mark has collaborated with a number of scientists and conservation organizations, and has contributed wildlife photography to many books, journals and educational resources. He writes a weekly column about birds in St. Maarten’s The Daily Herald and has been a featured speaker at a variety of local and regional conferences and events. His books and articles are available for free download at http://www.sxmwildlife.com.

This project is managed by the non-profit association Les Fruits de Mer, with support from the St. Eustatius Tourism Development Foundation and funding from NuStar Terminals, N.V..

About Les Fruits de Mer
Les Fruits de Mer is a non-profit association based in St. Martin whose core mission is to raise awareness about nature, culture, and sport. The organization carries out this mission through publications, an education program, and special public outreach events that entertain, inspire, and inform. The Association is currently accepting new member applications on its website, http://www.lesfruitsdemer.com.

About NuStar Terminals, N.V.
NuStar Terminals, N.V. is a for hire transshipment terminal storing petroleum oils. NuStar and its employees are actively involved in volunteerism and financial support for the local Statia community.  NuStar’s employees have founded the Statia Way Foundation which is funded by the employees and goes to support local non-government organizations (NGO).